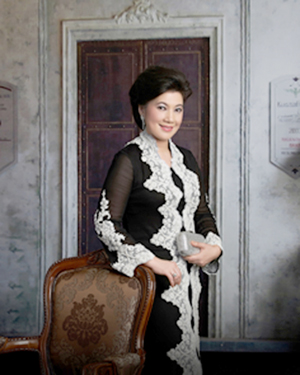 Appointed as Honorary Consul of the Republic of Estonia to the Special Capital District of Jakarta on July 31, 2012. Born in 1965 she graduated in Industrial Engineering at the Institute of Technology in Bandung in 1988 and continued in the USA for Master of Business Administration at the Fairfax University in 1995.

Ir. Adriana Sri Lestari, MBA is a member of:
The Institute of Technology Bandung Alumni Association
Association of Honorary Consuls to Indonesia (AHCI)

Awards Achieved
2019 : Best Keyboardist during Festival Band Alumni ITB 2019
1995 : Citra Karya Paramitha 1995
1981 : The winner ( the most talented ) during the Indonesia Beauty Contest for the Youth
1980 : Cecilia Musical Contest as an organist and second winner of the Lowrey Organ - West Java Contest

Distinction and Recognition
His Royal Highness Paku Buwono XIII, Sultan of Surakarta Hadiningrat recognizes Adriana to “KRAy” or “Princess” for her great dedication and social support to many persons and organizations.